It’s been a while since I talked about the books I read. Maybe you haven’t missed it maybe you did.There was a lot going on in the last two month of 2021, mainly work and I wasn’t able to read as much as I would have liked. I picked up a lot of easy reads that I abandoned hard way through. But I also found some really nuggets in the mix and those are worth mentioned. Even if we are already well

What it is about: Those who train their creative energy can become freer and happier. Tanja Queckenstedt shows how creativity can enrich our private and professional everyday life. Creativity does not only distinguish artists and inventors. Even in the lives of seemingly ordinary people, ideas bubble up and flashes of inspiration strike – if we let them.
What I thought: I loved this book. Not everything was a new to me but some things are worth hearing over and over. I loved that a lot of research was included in a fun and interesting way. I have learned new things, I often times had lots of food for thought, I underlined a lot in the book – and I never really do that because I like my books clean. This is a book I need to re-read to peel back all the layers of wisdom. Every chapter ends with an exercise putting your new knowledge to test right away. On another note, this book was the first gendered book I read. And it was very subtle – I only realized a few pages/chapters in.
Original Language and Title: Kopf voller Ideen paperback, ebook
Publications: currently only in German available
Recommend to: Everyone no matter if you call yourself a creative, need a kick-starter to get back in your flow or have not seen yourself as being creative yet.

What it is about: Goodreads says: Way out in the furthest part of the known world, a tiny stronghold exists all on its own, cut off from the rest of human-kin by monsters that lurk beneath the Snow Sea. There, a little boy called Ash waits for the return of his parents, singing a forbidden lullaby to remind him of them… and doing his best to avoid his very, VERY grumpy yeti guardian, Tobu.
What I thought: This was my present for my godchild. I bought it on a whim in a bookstore because it was just released and I knew its something she wouldn’t have been able to get from the library. Always a concern when someone reads a ton. And if time allows I try to read all the books I gift. This was such a positive surprise. I was was eager to find time to read. I really really want to know what happens next in the journey. And while it was a children’s book I was really happy that it kept me engaged as it did. The author is a children’s book illustrator and this was his first book. So all images are from him and the story really comes to life. I personally loved the quirky characters, the flaws they had and my favorite the grumpy but lovable yeti. And of course it was all set in snow.
Original Language and Title: Frostheart paperback, kindle
Publications: German: Die Legende von Frostherz Die Reise beginnt hardcover, kindle
Recommend to: Children who love adventure stories with a great gourd of friends, adult who enjoy a great story

The Bear and the Nightingale by Kathrine Arden | ★★★★☆

What it is about: Goodreads says: At the edge of the Russian wilderness, winter lasts most of the year and the snowdrifts grow taller than houses. But Vasilisa doesn’t mind—she spends the winter nights huddled around the embers of a fire with her beloved siblings, listening to her nurse’s fairy tales. Above all, she loves the chilling story of Frost, the blue-eyed winter demon, who appears in the frigid night to claim unwary souls. Wise Russians fear him, her nurse says, and honor the spirits of house and yard and forest that protect their homes from evil.
What I thought: I loved it. The snowy wilderness, the remote life, the huddles around a stove and all the woven in folklore. Not really a magic book, more of rumor of magic. A hint. I loved the characters – besides the priest, but that was meant to be I guess. It took me. bit to fall into the story but I think it was more because I had so much going on before Christmas and I just hadn’t had time to really get soaked up. I have the second of the trilogy ordered and really hope I can read soon. It takes a bit of time getting all the names sorted as they change. Whoever takes has different names for the person kind of like nicknames and not being familiar with the Russian abbreviations and shortening of names its a bit confusing.
Original Language and Title: English paperback, kindle
Publications: German Der Bär und die Nachtigal paperback, kindle
Recommend to: Everyone liking stories based on folklore, modern fairy tales and snowy and icy setting. Also people who enjoy books from Naomi Novak.

What it is about: Goodreads says: In the early 1900s, teenaged Sunja, the adored daughter of a crippled fisherman, falls for a wealthy stranger at the seashore near her home in Korea. He promises her the world, but when she discovers she is pregnant — and that her lover is married — she refuses to be bought. Instead, she accepts an offer of marriage from a gentle, sickly minister passing through on his way to Japan.
What I thought: It is a family epos over many generations from Koreans that had to leave the country. It starts in 1900 and followed the family into the 50’s and beyond. I enjoyed receiving a glimpse into life at the time told from a female perspective. The hardships to keep a family alive, the strong will that it takes and how to overcome crises. I personally didnt connect to well with the character what probably made it one y a 3 star read. I do like this kind of stories usually a bit more. Maybe it was just the unfamiliarity that didnt make it easy to connect. However I enjoyed it.
Original Language and Title: Pachinko hardcover, paperback, kindle
Publications: many languages, German “Ein einfaches Leben” hardcover, paperback, kindle
Recommend to: Everyone liking family sagas set in different countries, learning about culture and every day.

What it is about: Goodreads says: An intimate, revelatory book exploring the ways we can care for and repair ourselves when life knocks us down.
What I thought: What a disappointment. I was really really looking forward to this book and was overjoyed when I found it in my “Nikolausstifel” December 6th. It was high praised in my book club but for me it didn’t deliver.
The title states “The power of rest and retreat in difficult times” and I probably should have thought two seconds about it. I started reading this book thinking and hoping for a homage to winter, a write up of all the wonderful things and why winter is so important and a great time. Well it was more convincing people that it isn’t all bad. It also referred to winter not only as a season but more as a season in life as in struggle/crisis/overwhelm/depression. So I never really managed to wrap my head around it.

Still stat wouldn’t result in a 2 star. review. Overall I found this book very boring. A lot of topics, studies and thoughts were mentioned but it felt unconnected. I could not see what kind of structure the book had or if at all. I felt more like. I need to write a book, what could be a seller and what can I research about it.

And I hated how the author kept talking about her kid. Know one of those mom that ones they have kids every second sentence is oh and my kid di that and xx is doing that and blabalabla. I don’t care about your kid. I might have it it had some value to the topic but this was just nonsense.

So yes overall a disappointment and I have already traded it on bookstagram. Hope someone else can gain more from it.

I read a few more books – all some cheesy Christmas novels. All more or less with the same plot line. Good for getting into the Christmas spirit and spend some cosy hours on the couch but nothing you need to read so I won’t tell you here. If you want to know what exactly those books were head on over to goodreads to read up. 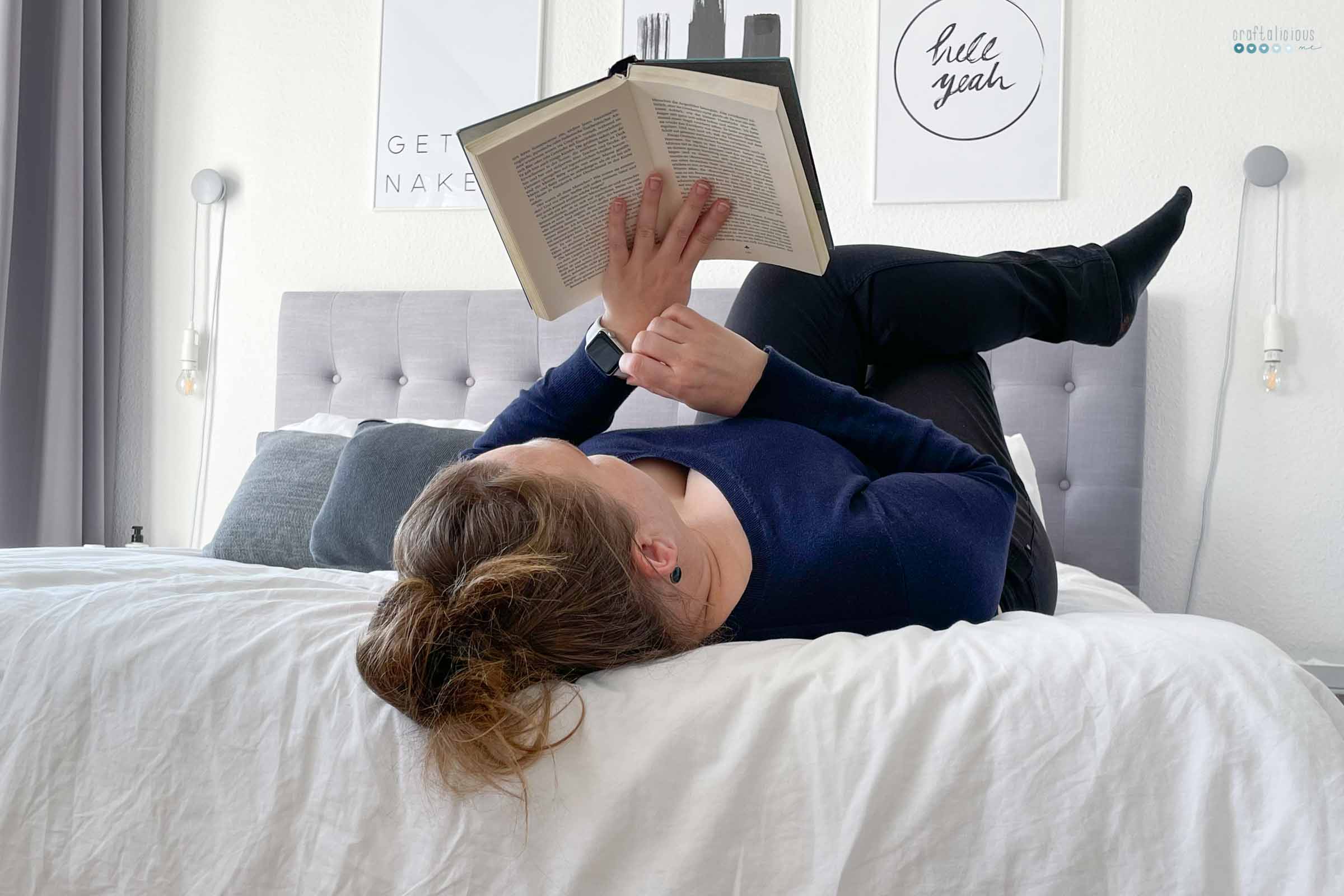